Thanks to everyone who is packing the venue to hear about my Trump protest especially the Americans who cheer loudly at the Trump is a Cunt image above. Who knew calling him names would have went viral and opened my act up to so many new comedy fans.

“Lorna did you eat everything in the fridge?” it was 3 am we had not long come off stage and been talking about all the yummy food we had in the gorgeous flat.

Yes the tall skinny gangly teenage cousin visiting for the fringe did eat everything like a locust on a mission. Me and my daughter Ashley plotted her murder as we were looking forward to our Dim Sum or Salmon Salad or Chicken Pasta salad or two pint pots of exotic fruits or a slice of walnut cake. Nope ….all gone. I am surprised she managed to stop Snap Chatting long enough to shove all that grub into her mouth.

Luckily we love her and her self awareness gene is just kicking in….bloody teenagers. But we were SO HUNGRY and you never let Ashley get hungry when shops are closed, I recall few years ago a 5am hunger weeping fit in New Zealand after a 27 hour flight and jet lag, I almost lactated to feed her.

It’s normally just me and my daughter Ashley at the Edinburgh festival we are veterans at this game. Ashley has been coming to the festival for 20 years (she is only 30) and has been performing for about six of those- her first show was at 13 years old, she is still officially the youngest comic to do her own solo show.

Lorna had been coming to the Edinburgh fringe as child visiting for one or two days BUT this time she was here to stay for ten days and thrown into the fray and quickly became adept at flyering and managing doors in a venue and eating all our food. We have forgiven her and lessons have been learnt as well as a few swear words.

We are at the Three Sisters venue down on the Cowgate in the capital city. It’s a free show which means at the end you put down a bucket and audiences decide to pay what they feel. This has been hugely successful for me and Ashley.

Normally big venues with big staff and huge posters can and do charge astronomical fees for having you in their venue. For instance you can sell thirty thousand pounds worth of tickets and end up with about SEVEN grand after they take all their costs. It’s a business model and it’s been there since time began. It’s not wrong, it’s just not for me.

I have done every single BIG VENUE at the fringe and comics will say “it’s not about making money, its about getting noticed” well only about 6 comedians from London get noticed a year and that means the hundreds of unnoticed comics paid fucking whack loads of cash and lost shed loads of money for some shit reviews and half filled venues as the London comics gave away FREE TICKETS to the paid venue you are in as you have to survive on 2 for 1 deals throughout the week. Screw that.

I wont do it. I make twice the cash through the bucket and somehow it feels a cleaner transaction between audience and punter as you arent fucking them for credit card charges and you dont have an off shore account to screw the tax system. I also pay the door staff and my flyerers a fair living wage with sick pay and bonus’s.

So far it’s been a great run both me and Ashley have had 2 FOUR star reviews each and full houses every day. We have to turn people away some nights and we both have great rooms. Mines holds about 200 and she has about 80–90 in hers.

The team we hire to look after the doors and the venue are local to Edinburgh my assistant Nicola and her buddy Hope are working to supplement paying for their Masters Degree’s and are so amazing. My other staff member is Andrew who works in theatre is just brilliant and we have Helen to fill in a day off — SO we have our wee fringe family right there.

We managed to secure a stunning flat in the renovated old maternity hospital down in the Quartermile in the centre of Edinburgh.

I am also performing for two shows my monologues — I wrote three monologues based on Birth, Death and Sacrifice and Richard Melvin is producing them at The Pleasance Courtyard. I am so proud of them please come check it out.

The first performance was on Wednesday 17th August the second showing is at 4pm on 23rd August at Pleasance Courtyard.

So there is only one opportunity to see them now- 4pm 23rd August at Pleasance Courtyard.

They were amazing they have never been heard onstage before. I perform two of them and Julia Sutherland does one. She is a fucking terrific actress.

The sun is out in Edinburgh I am having a great time but am missing my dad terribly. He is in a care home back in Glasgow and I usually see him every single day but I have missed him being in the capital.

We are over the half way mark at the fringe if you fancy good shows come and see us. Please come early about 30 mins to our shows and we will do our best to get you in.

Three Sisters on Cowgate Ashley Storrie is on at 5.15pm and I am on at 7pm. 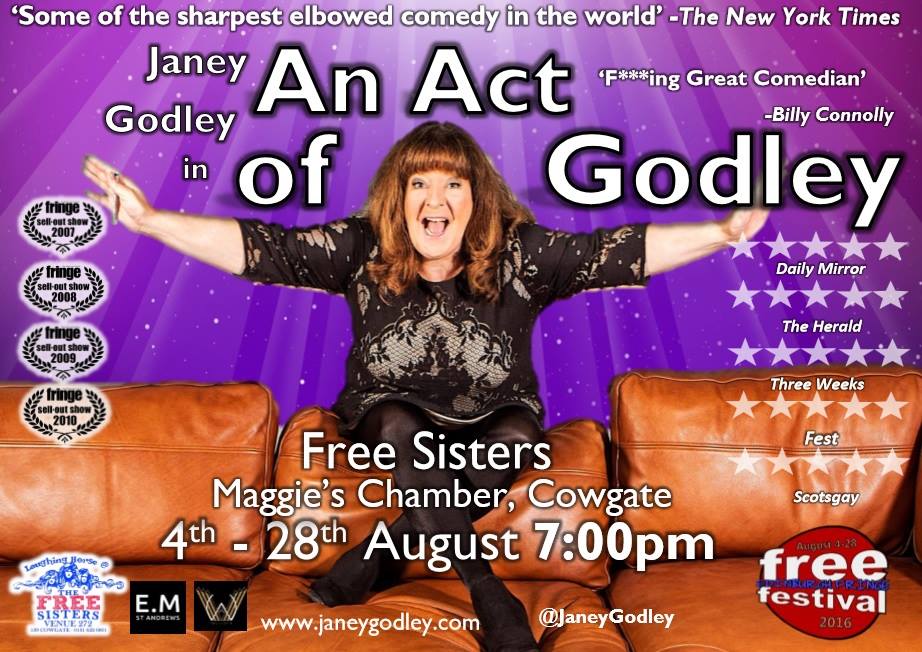