This entire story happened and was tweeted live by me Janey Godley from a Virgin train from Glasgow to London.
Follow me on Twitter @janeygodley
Ø Couple on train before it’s even moved have fallen out over “her inability to accept the truth” this will be fun. @VirginTrains.
Ø She just told him” I can accept the truth you are incapable of speaking it NOW WHO the FUCK is TIA and why did she email you.

Ø The train hasn’t even MOVED yet.
Ø He said “Tia isn’t working with us anymore she lives in Rome now” she said “lucky fucking her is she a nun then?” and slammed her bag down.
Ø He hissed” shut up Freya, we never had anything going on it was when we were staying in Bognor remember?” she says “yes Bognor”.
Ø Freya says “you were impotent in Bognor or were you just exhausted fucking Tia”.
Ø He (Tim) is staring at floor Freya is eating a sandwich in a furious chompy manner as if it was his limp cock ( am guessing).
Ø Freya is on her text and Tim is pretending to ignore her. Tim-“who are you sending that piece of shit to?” “ur mum” she said.
Ø @VirginTrains brill am tweeting an argument between Freya and Tim sitting near me.

Ø Tim just rubbed his eye “stop grooming me Freya” he said. She stared and said “did Tia ‘groom’ you? (She did rabbit fingers).
Ø Tim has gone to loo Freya just called ‘Lisa” on mobile “I hate him Lisa he never explains his emails or texts that I find” .
Ø Freya is off the phone.

Ø I think Freya is a psychotic bitch Tim might have jumped from the train.
Ø Tim is back.
Ø “Now tell me everything about Tia” she hisses and Tim is staring at her I think he is scared.
Ø She just PLUCKED out one of his eyebrows out in the middle of a conversation with her fingers!
Ø Tim tried to hold her hand but Freya just grabbed his face and snogged him.
Ø Train is moving fine now Freya is gripping Tim’s hand imploringly.

Ø “I love you Tim” says Freya.

Ø Tim says “I was close to Tia back in 99 before we met” fucking NO TIM don’t tell her! Freya is smiling encouraging him to tell.
Ø “Tia and I flat shared in Manchester in late 90s was wild times” Tim smiled wistful.
Ø Freya is actually gnashing her jaw how can Tim not see this? “Wild how?” she asks.
Ø “I told you I was in a band at Uni back in late 90s” Tim pleads. Freya snorts “was it Oasis?” and laughs really loudly at Tim.
Ø Tim stupidly explains “we did a few festivals together when I was in the band” Freya laughs “what BAND? You were in a band?”
Ø Tim has got up and walked off Freya is on phone to her pal Lisa “did you know this wanker was in a band? Me neither”.
Ø Oh my god Freya doesn’t know this poor bastard was in a band – what band?
Ø “Lisa am getting the morning after pill I have six hours left to make sure am not pregnant to this loser” said Freya.

Ø Tim is back he is looking at me suspiciously hope he can’t see me tweeting.
Ø Tim “Freya I never loved Tia – it was 98 last time I saw her, she emailed to say she is in Rome living please stop fighting”.
Ø Tim “I love you Freya” FUCK don’t love her Tim she hates you!

Ø Tim is back to staring at floor Freya is smiling.
Ø “Am pregnant” Freya just said to Tim. Oh My FUCKING god she isn’t she is going to take morning after pill DO I STEP in?
Ø Tunnel.
Ø “Are you sure?” he is asking. She is glaring at him ” of course am sure am a woman are u calling me a liar?”

Ø Meanwhile am shaking my head at him mouthing the word LIAR.

Ø He isn’t looking at me I must not get involved.
Ø Freya just said “well I might not be pregnant but am thinking of not taking the morning after pill which is same thing”.
Ø There is another watcher to this story just spotted a man watching me watching them he has raised an eyebrow at me.
Ø Tim “that’s not the same as being pregnant for fucking hells sake Freya take the pill I don’t want this anymore” people staring.
Ø Freya just said “I love you don’t leave me what about Debra?”
Ø Who the fuck is Debra?
Ø Tim has turned away from me and said “Debra will be fine don’t pretend you loved her as well?”  I want to ask who Debra is.
Ø Freya “Debra needs grooming” please oh fuck please let Debra be a horse and not a child.
Ø “Am not paying to keep her anymore Tim if you leave me” Freya says  an guessing Debra is s horse.
Ø He says “am riding Debra this week” phew Debra is a horse/ pony/ thing.
Ø “Look can we stop talking about your fucking horse and explain why u r leaving me?” says Freya.
Ø Tim “you pretended to be pregnant Freya”.
Ø “I didn’t pretend I said I might be you always make me the liar Tim” says Freya “I wish I recorded what u said” says Tim.
Ø I wish Debra was another woman he is riding and I wish I could tell Tim I have recorded what Freya said.

Ø Tim stormed off Freya is crying into phone “Lisa he is being horrible and I think am pregnant if i don’t take morning after”.

Ø She is tall slim blonde English with big Smokey eye makeup he is rugged tall and dark English posh.

Ø Tim is back with four cans of beer and has SAT AT ANOTHER TABLE.

Ø Personally I don’t think she is pregnant and is lying but am just a watcher.
Ø Freya has got up and sat beside Tim trying to hug him.

Ø He is wearing dark suit jacket blue shirt she is wearing fawn coat and big boots.
Ø Tim is ignoring Freya’s attempts to reconcile half way down the train a toddler fell and there is baby screams.
Ø The baby screams very well timed Tim is talking to ‘RUPPY’ his pal.. Oh My GOD Tim just got up and ran off train at Carlisle.

Ø Train is moving off now and Freya is just banging on window ! Even I didn’t expect that! Fuck TIM is OFF.
Ø Ladies and gentlemen Tim is off at Carlisle and waving. 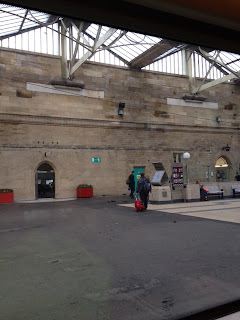 Ø Tim is off the train twitpic.com/9z8jxb
Ø Freya is sitting pretending she didn’t care Tim is off and is moving cans to the side she is calling Lisa on phone.
Ø @JaneyGodley: Ladies and gentlemen Tim is off at Carlisle and waving.
Ø Freya to Lisa “He just got off train at Carlisle… Yes he took his bag and ran off. Am taking the pill now he is such a wimp”.
Ø Freya has moved seats left the beer and applying make up and rustling a bag with BOots chemist logo e.
Ø She is taking the pill (thank god) and is now talking on her phone.
Ø “He was good at going down” WTF ? Who is she speaking to?

Ø “We didn’t really make a go of it he prefers horses and was in Iraq for most of the year?” she is saying.

Ø Am guessing Tim was in army? Why else would you go to Iraq?
Ø TIM has called her PEOPLE TIM is on the phone.
Ø “Fuck you Tim” Freya is shouting “am getting off next stop Marcus is coming to get me”.
Ø Tim hung up by the sounds of it and now Freya is sitting staring out of the window.
Ø I hope Tim and his horse go to Rome and find Tia.
Ø Freya calling Lisa “by the way Stella McCartney is really ugly close up & a bit fat, I hate her stuff”.
Ø Freya to Lisa” yeah he is off the train fuck him Marcus is going to meet me at Next stop”.
Ø Freya is staring at me.
Ø Am dying to ask if she is ok to get who Marcus is.

Ø “I don’t give a fuck Tim” she is shouting.
Ø “Take your horse and stick it up your arse for all I care and I hope you find a woman who doesn’t mind your shit cock”.
Ø “go back to Iraq with your mates or whatever they are called …well ..That then …regiment …whatever, I don’t care”.
Ø “Am not pregnant who said I was pregnant? Don’t you dare slag Lisa” Freya on phone to Tim.
Ø “I am meeting Marcus at …” puts hand over phone asks me ” what is next station?” me- “Oxenhome” her “what?”
Ø Freya to Tim on phone “am meeting Marcus at Oxenhome if you must know l”.

Ø I gave went over … Am in … Am offering a hankie.

Ø She stared at me funny am back in my seat am out again.
Ø She is pretending to sleep.
Ø Freya is up shed us getting her bag together I think she is getting off at Oxenholme.

Ø Oh she is back on the phone “am sorry Tim am sorry please meet me at Oxenholme? I love you”.
Ø Freya on phone “please Tim meet me there? I will wait for you there I love you”.

Ø She is getting off at Oxenholme to meet Tim.

Ø She got off at Oxenholme and is in phone to Tim they are meeting up I think THE END.
Conclusion- Three Days Later
Ø Sorry if I shed heaps of followers after that drama from Glasgow all done now time for a cuppa for me.
Ø Poor Tim I hope he uses his army training to hide in Carlisle and avoid her.
Ø Dear lord I GOT an EMAIL to my WEBSITE from TIM or someone claiming to be him!
Ø Am not sure it’s him “Tim EMAILED me” have asked for a photo as I know what he looks like.
Ø Tim is confirmed TIM emailed me a photo of him and it’s HIM! OMG I asked him what happened at Carlisle.
Ø He said a mate follows me on twitter and he recognised the names and description.
Ø Told me briefly in email he is glad he read the thread as he didn’t know Freya said those things – he DIDN’T go to Oxenholme!
Ø He’s going to Cornwall where he lives & has a horse and hopes Freya finds Marcus and leaves him alone – he is a bit embarrassed.