I remember being normal. I was young and worked in a bar and watched normal people do normal things.
Things like other normal people did. Normal is good, it’s a safe place to be. It’s the majority.
There were normal people working in normal jobs and who saved up for a yearly holiday and bought washing machines and normal stuff.
We all came from the normal people, we didn’t really know people who did anything different. Maybe the guy who lived in the bus shelter and liked to sing in the style of Al Jolson, he was a bit different but nobody wanted to be him. We liked being normal.
Then one night Jerry Sadowitz walked into my bar with brother Jim (who died a few years ago). Sadowitz did comedy.
This was early 80s nobody did shocking comedy about the Hungerford Shooter. He did. It was funny. It wasn’t normal.
It was literally hysterical and many people claim to be there that night Sadowitz first played the Weavers Inn.
It became stuff of legend.
They weren’t there. I was there and three other people. It was a normal Tuesday.
He was a comedian and a magician, he did amazing stuff and people loved and hated his jokes. Mostly loved.
He went to the Edinburgh Fringe and did a show. Normal people went through to Edinburgh for the day and watched stuff and came home. He stayed there going onstage every night.
Who does that?
Years later I stopped being normal. I gave up normality and became one of those people who check mic’s and walk behind the stage and talk to people in charge of venues.
I swapped a yearly holiday and started going for a whole month to someone else’s house to stay (which was completely abnormal as I didn’t know them) and started getting cold sweats standing onstage saying stuff.
It wasn’t normal. I met artists, actors, musicians and people who also never did normal jobs but travelled about the world talking to audiences and making money standing on stage.
Can you imagine walking onstage and seeing your favourite pop star or actor waiting to hear you speak?
It’s totally not normal. Billy Connolly watching me onstage as he sits with Ashley sharing a pot of tea will never leave my memory.
My daughter Ashley barely recalls normal. Even at thirteen she went to Edinburgh and stopped being a normal kid and became a comedian.
She never went back to normal. She lived in a world where she understood phrases like ‘black out curtains’ ‘Door splits’ ‘60% in your favour plus a guarantee’ and ‘green room’ that was never ever painted green.
When her teen pals were off to Ibiza for summer hols….she was organising flyering teams, helping the Underbelly guys in the press office and directing a play we wrote in my living room.
At 16 she was interviewing Russell Brand and Ricky Gervais and getting Meryl Streep mixed up with Glen Close in a dark alleyway on the Cowgate. Poor Meryl Streep her son was in an Underbelly show and Ashley was to get a quote from her on camera….I often wonder what she thought of the tall Scottish teenager who asked her if she has spotted Glen Close.
My husband was never really normal, he quite happily upsticks and moved house for a month every year as he has some gypsy in his blood. He knew the words ‘put up’ and ‘pull down’ having been in a caravan carnival family before.
I love being a comedian.
I recall the thrill of standing in a room being nervous with a famous person off the telly being nervous with me. The normal people never see that.
So yet again we are off to Edinburgh Fringe.
Ashley and I both have shows.
We will do stuff normal mum and daughter’s don’t do.
Like help each other get our room ready for a show.
Like move into the 18th temporary house of our life.
Watch each other onstage and organise each other’s press release and record our weekly award winning ‘only mum and daughter’ comedy podcast.
In fact I have just realised.
We are normal…you guys who come to the festival and pay for tickets…that’s abnormal you know why?
Our shows are Free!
See you in August.
Ashley Storrie is at 6.15pm and am at 7.45pm at Counting House. 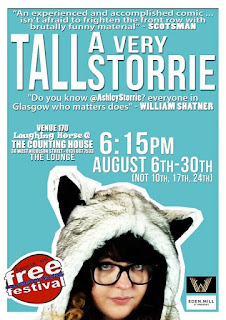 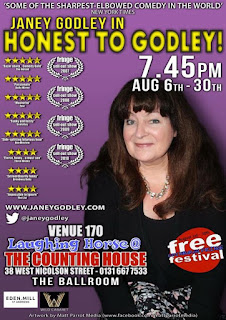